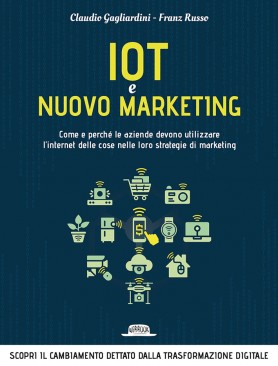 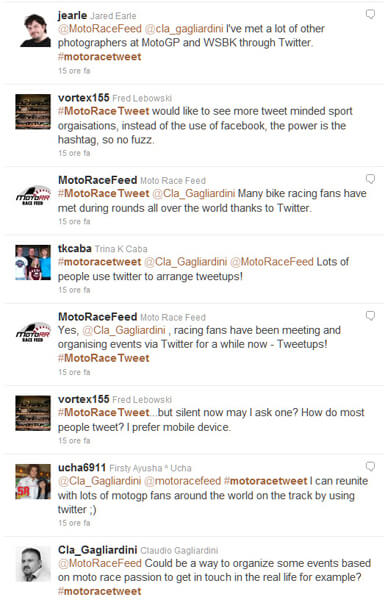 As a part of my case study on “Twitter & MotoGP”, started in Valencia, during the last race of 2011 season, I had the honour to have a very good and interesting “twitterview” with Gaelle of @MotoRaceFeed and a lot of their followers and readers. It was another great occasion to understand what people expect from Twitter and what they do and get using it. This experiment has allowed to point out that the real strength of Twitter is based on its immediacy, on the power of the hashtag, which allows you to follow a topic in real time and from around the world and on its ability to build relationships and interactions that can leave the virtual dimension and extend into real life.

A great media, with huge prospects, the ideal tool for live streaming of events of all kind, all over the world. Very interesting to notice that Twitter is a way to meet and interact with people following “niche” topics and passions and that it would be difficult to meet people like themselves in real life and in the nearby. I just paste here the feed of the twitterview,  giving some importance to the most relevant tweets:

@Cla_Gagliardini: @MotoRaceFeed, 1st question: What do people expect from Twitter as a media to get infos on their favourite topics?

@MotoRaceFeed: I think people use Twitter to get info quicker and also from direct sources like teams and riders.

@MotoRaceFeed: Yes, @Almightydutch and you get different angles on stories too via Twitter

@Cla_Gagliardini: I think it’s a brand new way to get in touch with news and sources. May be even to interact with some of them?

@MotoRaceFeed: Yes, I have been doing this feed for almost 2 years now and it is amazing the people I have twitted with.

@AmboClaire: I go 1st for Twitter for motorsport & breaking news. Try to get things verified by several sources.

@tkcaba: I use @MotoRaceFeed to play catchup, being in USA I miss a lot.

@MotoRaceFeed: Twitter is still strong for news and getting stronger.

@vortex155: Twitter is a good medium for real time info.

@Cla_Gagliardini: @MotoRaceFeed What do people mostly ask you on Twitter? May be something they can’t find on the old medias?

@tkcaba: I see news I tend to keep reading tweets until confirmed.

@MotoRaceFeed: It is usually faster than the old media. Questions vary from timings to crash updates etc…

@AmboClaire: Also, instant pictures too. This, sometimes has a downside as demonstrated when we lost Marco (Simoncelli)

@Cakra_54: I’m from Indonesia, to keep me update for all races I just check my timeline from @MotoRaceTweet.

@tkcaba: Before twitter I really had to search the net for info, now with twitter the news is there.

@proc1: Its interesting to get live thoughts while watching the races. Different perspectives all at once. Very habit forming.

@vortex155: @motoracefeed is at the spot, most of her followers aren’t, so she can do something extra.

@MotoRaceFeed: People also like the fact that they can ask me about less known riders on track and I give updates.

@dewiBarca: Thats cool. Do u remember how many time u meet n has a conversation with Pedrosa?? 😀

@tkcaba: You can ask about a rider that isn’t at the top and she can get the info.

@MotoRaceFeed: Definitely. I used to be the only one on Twitter in the Media Centre. Now, many people are!

@AmboClaire: My brother makes a business out of instant messaging organisation in businesses. It’s HUGE.

@AmboClaire: Me neither & I was a BBC news junkie. This is news & friends on the gooooo!

@MotoRaceFeed: I haven’t used anything else in the past 2 years. I don’t even watch news on TV much now.

@Cla_Gagliardini: Could Twitter be a way to organize some meetings or events based on moto race passion to get in touch in the real life, for example?

@vortex155: May I ask one? How do most people tweet? I prefer mobile device.

@Cla_Gagliardini: I use it mostly on mobile device, but PC is more comfortable!

@ucha6911: I can reunite with lots of motogp fans around the world on the track by using twitter 😉

@MotoRaceFeed: Yes, @Cla_Gagliardini racing fans have been meeting and organising events via Twitter for a while now – Tweetups!

@tkcaba: Lots of people use twitter to arrange tweetups!

@MotoRaceFeed: Many bike racing fans have met during rounds all over the world thanks to Twitter.

@tkcaba: It is great fun to meet people you have “met” on twitter

@jearle: I’ve met a lot of other photographers at MotoGP and WSBK through Twitter.

@MotoRaceFeed: We did organise a Tweet up with fans and the guys from Fiat Yamaha last year at Silverstone

@vortex155: …Twitter aint popular overhere, and you get no info at all during national endurance races for instance.

@Cla_Gagliardini: @vortex155 Twitter will be soon very popular everywhere, I guess! Twitter is the future of human relationships!

@vortex155: That other medium is more popular overhere, Facebook, but that’s a complete mess and never cant be used for live stream.

@gre2gor: Before I had not had a chance to keep in touch with all the sports like #motoGP, Since you guys twits, I can be more involved.

@Cla_Gagliardini: So it is not only virtuality, Twitter is also and absolutely real life and real time, is’nt it?

@proc1: IM certain there are others, who just like me only joined twitter to get faster racing news.

@AmboClaire: Oh yes. I’ve met about 30 people from Twitter and a few of the are now close friends 🙂

@jearle: Also, at events, we can be asked over twitter to take specific photos of riders.

@tkcaba: It’s great when the riders tweet, whether it is every day stuff or race/injury info, you can feel connected.

@MotoRaceFeed: @vortex155 Thank you. I wouldn’t do it without my followers’ support and interest.

@racenerd: We had one (meeting) in Assen. Was great and we have plans to do it again!

@callmesarii99: I’ve met a bunch of people who love MotoGP through twitter and make some friends 😀

@Cla_Gagliardini: @jearle can I ask you why a lot of photographer tweet locked (private)?

@MotoRaceFeed: Not many of the top bike racing photographers I know have locked account.

@jearle Jared: I have no idea. I follow a lot who aren’t. Most using Twitter as marketing understand they need to be seen.

@vortex155: Think people who lock twit, use same logic as facebook. Choose who follows or not, a bit strange.

@ProNikon: I’m not sending out “private life” tweets or in a small amount which are well over thought… Almost everything is bike related 😉

@MotoRaceFeed: Some people have a locked personal account for private life and a public one for bikes. Like me.

@Cla_Gagliardini: So, Twitter is about information, interaction, meeting people online and in the real life, getting in touch… someting more?

@MissBethAndrews: It gives the sport a greater atmosphere! I don’t know many people in my life who love #MotoGP.

@jearle: I’m sure that you’ve seen how wide this #MotoRaceTweet travels with the sheer volume of people replying. 🙂

@MotoRaceFeed: That’s it. Faster way to get news and find people with the same interests. Great for debates too.

@MotoRaceFeed: As a woman, Twitter has been the best way to find other ladies with bike racing interest.

@MissBethAndrews: I would support that too, i get a lot of responses off men as well saying its great to see!

@BoxerRach_99: Me too! RT @callmesarii99: @MotoRaceFeed @cla_gagliardini I’ve met a bunch of people who love MotoGP through twitter and make some friends 😀

@GuidaFerrara: Sharing hopes and fears the very moment you feel them,realizing you are not alone. Beautiful feeling!

@MotoRaceFeed: When people can’t watch TV, they ask me how their favourite rider is doing, weather conditions, timings…

@MotoRaceFeed: It’s funny how many people still think I am a man because of my live feed!

@proc1: @hey were very precise machines, exactly what motoGP is supposed to be about. faster than the 990s thats progress.

@tkcaba: There is a learning curve, when to ask and when to just wait and read/watch.

@MotoRaceFeed: More seriously, I get asked about riders’ conditions too when they crash as fans get concerned.

@louisamae91: The feed was the best thing i found last year when i couldn’t watch the races.

@MissBethAndrews: I know!!! Motorsport is assumed a man’s sport. People still looked shocked when I out do them.

@MissBethAndrews: A lot of people, men especially noted that my #Sic blog summed their emotions up perfectly.

@DaveNeal: I’ve found lots of people to share my bike passion on here, met some of them – great people!

@vortex155: Btw…thing is Twitter sits on a huge goldmine & still don’t get how to dig it up, but it’s quite simples actually.

@Cla_Gagliardini: OK, last question for @MotoRaceFeed. How did you share with your tweeps the great emotions for #sic ceremony in Valencia?

@MotoRaceFeed: I posted photos on motoracereports.com later that day and described the atmosphere to the fans all weekend.

@MotoRaceFeed: Photos were better than words. Always the case in those tough situations.

@callmesarii99: We cross the world cross the country only by twitter 🙂

@Cla_Gagliardini: So, it’s getting late, for me… sorry, but I have to leave you in some minutes. You are great, thank you all!

@MotoRaceFeed: Thank you to @Cla_Gagliardini for the #MotoRaceTweet #Twitterview experiment and to all of you who participated.

@yodiwijaya: RT @MotoRaceFeed: Thank you to @Cla_Gagliardini for the Twitterview experiment and to all of you who participated.

@vortex155: It was a good experiment. We should do it again. Grazie mille! #MotoRaceTweet Cheers.